According to details, Ayaz was on his way to Ghumry oilfield, 50kms from Palooch, where his car was ambushed by South Sudan rebels. The kidnappers took him along with three associates.

yaz Hussain Jamali, 25, worked in an oilfield of China Petroleum Engineering and Construction Corporation (CPECC). He was scheduled to return to the country on April 5 for his wedding in Karachi a week after. 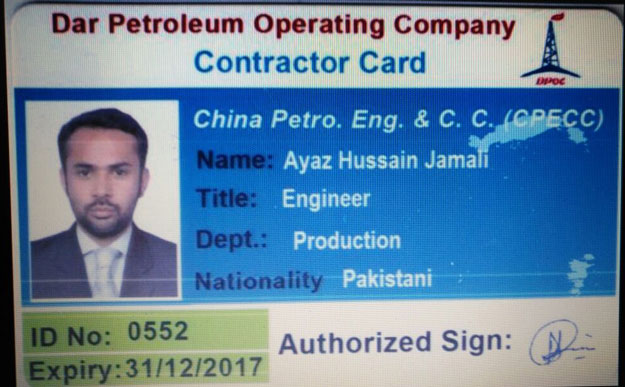 The country has been mired in civil war since President Salva Kiir sacked Riek Machar in 2013. Fighting has forced 3 million people to flee their homes, split much of the population along ethnic lines and paralysed agriculture, leaving the country facing famine, according to the United Nations.

According to Akhtar, the rebels loyal to Machar, allegedly killed the driver of the vehicle in which Ayaz along with other locals left the camp for the field Sunday morning. The body of the driver, identified as Thomas, was found after a few hours’ search in the evening.

The CPECC’s main oilfield is located 1,000kms away from the capital city of Juba in Palooch.

He said the rebels also kidnapped two Indians belonging to Tamil Nadu state, both operators in CPECC, on March 8. They haven’t been recovered yet.

Machar warned that the abducted will only be released once all the foreigners leave the country. As many as 120 Pakistanis are working for CPECC in South Sudan.