Protesters are demanding the resignation of PM Nawaz Sharif.

Demonstrators loyal to opposition politician Imran Khan and cleric Tahirul Qadri have been taking part in a sit-in for two weeks.

They accuse Mr Sharif of corruption and electoral fraud – charges he denies.

The army commanders’ meeting was brought forward after violence overnight.

Gen Sharif had stepped in on Friday to mediate, after Imran Khan ended talks with the government.

In a statement, the army said the commanders viewed the ongoing political crisis with “serious concern”.

“Further use of force will only aggravate the problem.” 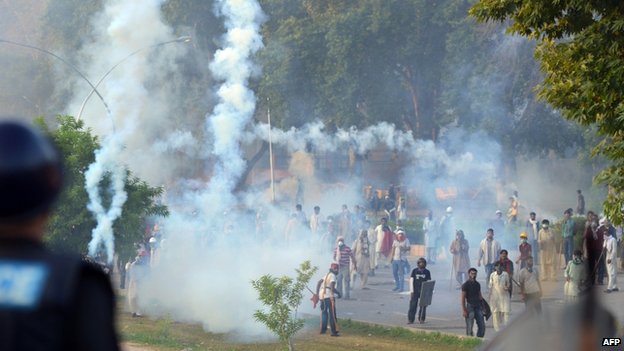 Nearly 400 people were injured in the clashes 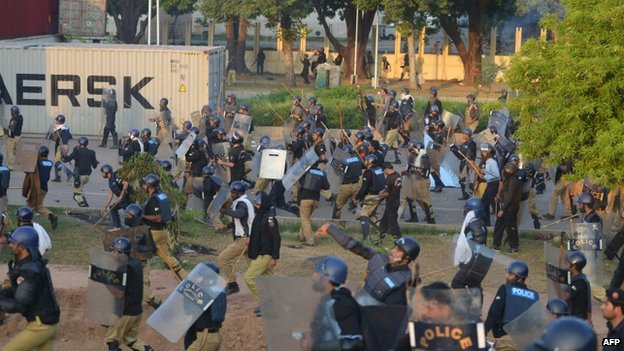 On Sunday, police tried to disperse the protesters, who were regrouping

The protesters broke security barriers to move closer to Mr Sharif’s residence late on Saturday, sparking clashes with the police which continued overnight and into Sunday.

Islamabad police chief Khalid Khattak told the BBC that close to 100 protesters had been arrested, some armed with “axes, hammers and cutters”.

An official at the Polyclinic hospital in Islamabad told reporters that the wounds of those injured were caused by tear-gas shells, stones and batons. 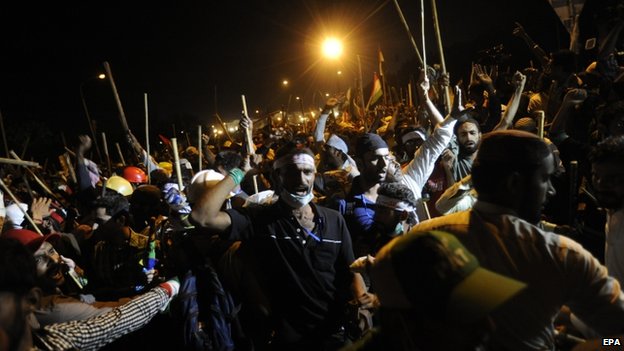 Overnight, a number of protesters were seen carrying clubs as they marched on the PM’s residence 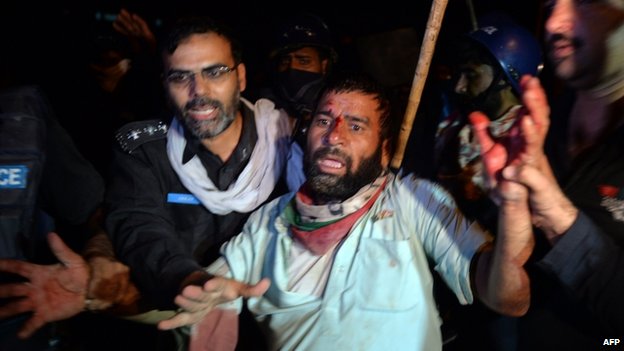 Nearly 100 protesters were arrested at the scene

One protester died of a heart attack in a ditch near the clashes, said Dr Wasim Khawaja, spokesman for the Pakistan Institute of Medical Sciences hospital in Islamabad.

A BBC correspondent who visited the same hospital reports that many of the injured are policemen.

Speaking to BBC World TV, Mr Qadri condemned the police’s actions as an “unimaginable attack by the state upon the people”, and denied that protesters were armed.

Imran Khan said on Sunday: “I am prepared to die here. I have learnt that the government plans a major crackdown against us tonight. I am here till my last breath.”

The protesters began their sit-in after a huge march from Lahore to Islamabad, vowing to camp out in the capital until the government stood down.