GAZA CITY – Officials from Hamas and Islamic Jihad have said a deal has been reached with Israel to end a seven-week war that has killed more than 2,000 Palestinians.

Ziad Nakhala, a senior official in Islamic Jihad, said the deal calls for an ‘open-ended’ cease-fire, along with an Israeli agreement to ease its blockade of Gaza to allow relief supplies and construction materials into the war-battered region.

Talks on more complex issues, such as Hamas’ demand to build an airport and a seaport for Gaza, would begin in a month, he said.

The Hamas official, who spoke on condition of anonymity pending the announcement, confirmed the terms.

Egypt planned an announcement later Tuesday, The Associated Press reported. There was no immediate Israeli comment.

If the terms of the cease-fire are confirmed, it would effectively mean Hamas settled for terms similar to those that ended more than a week of fighting with Israel in 2012.

The announcement was made after Israel this morning bombed two high-rise buildings in Gaza that were packed with homes and shops. 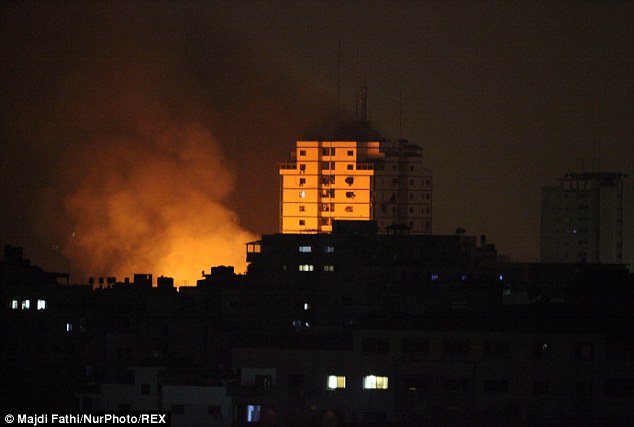 As a result of the Gaza City attacks, the 15-storey Al-Basha Tower collapsed, while the nearby Italian Complex was severely damaged.

Fortunately nobody was killed as both buildings had been evacuated following advance warnings from the Israeli military, although 25 people were wounded as a result of the strike on the Italian Complex – a large commercial building containing scores of shops and offices.

News of the military escalation in Gaza arrived as a poll found Israeli Prime Minister Benjamin Netanyahu’s approval rating has dramatically fallen to just 38 per cent – down from an all-time high of 82 per cent last month when Israeli ground troops were first sent in to the Palestinian territory. 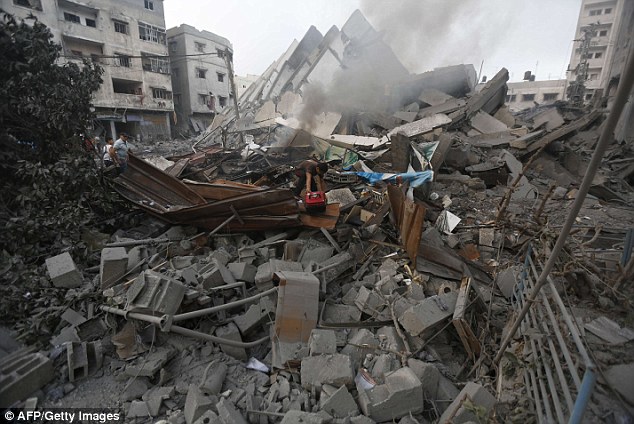 In the past, the Israeli military has hit high-rise targets in in pinpoint strikes, but left the buildings standing.

Since Saturday, it has toppled or destroyed five towers and shopping complexes in an apparent new tactic aimed at increasing pressure on Hamas.