NEW YORK – If you flicked through his photographs, you might think that surfing instructor Callum Morse lives in Tenerife or Hawaii.

You would never believe that his stunning pictures of sunrises and sunsets, captured from inside rolling waves, were taken literally just off these shores – on the coast of Cornwall.

Mr Morse, 22, has been capturing incredible images of daybreak and twilight from the sea for five years, and they give us views normally reserved for the very bravest of surfers – from inside the barrels of waves. 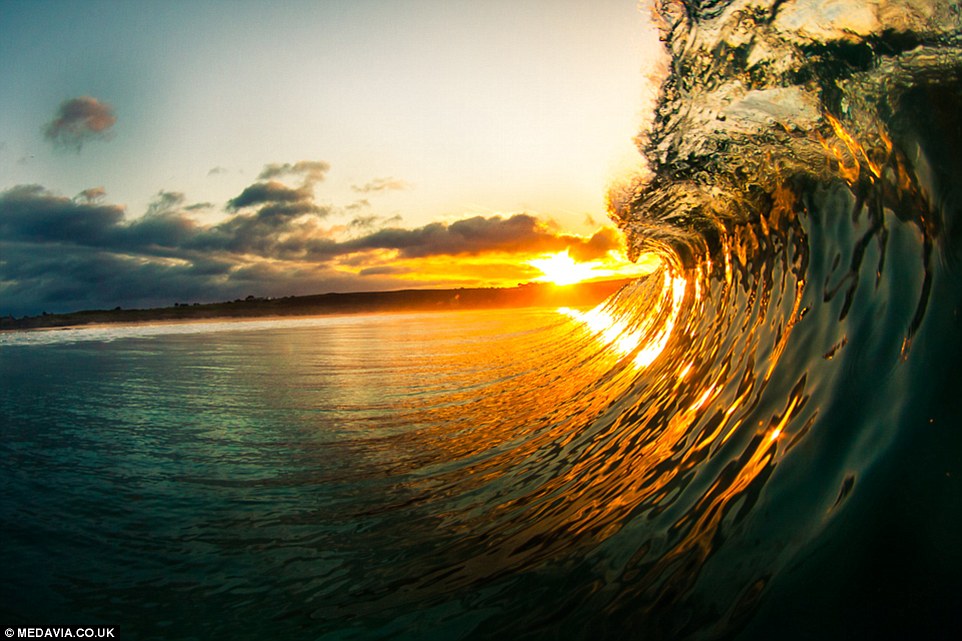 Callum Morse, 22, lives in St Ives, Cornwall, but people struggle to believe him when he tells them his photos were taken there and not in Hawaii or the Canary Islands. This photo was taken at sunset in St Ives Bay (Hayle) 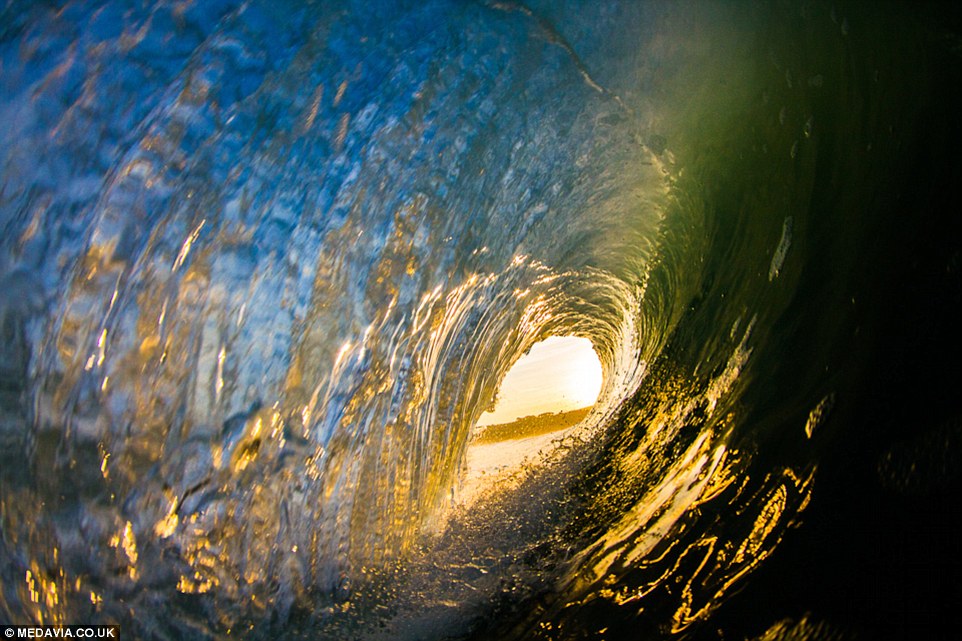 This image, taken at Porthtowan, gives a rare glimpse into the lives of the bravest of surfers, seeing sunrises and sunsets as never before – through the barrel of a wave 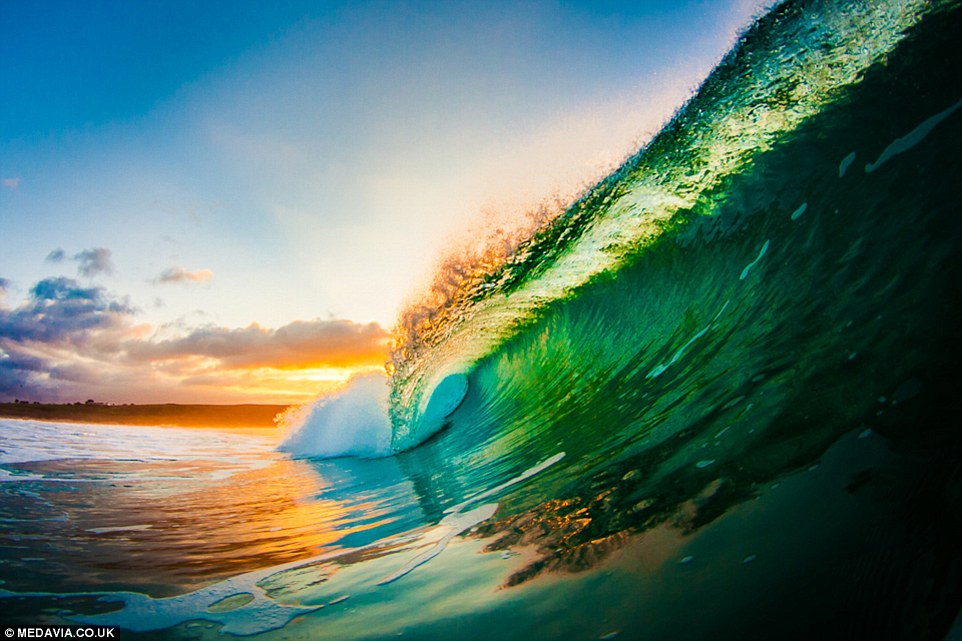 The sunrises create some incredible, vivid colours as they catch the tips of the crashing waves, like these at St Ives Bay (Hayle)

The St Ives man is extremely dedicated to his cause –  he will wade out into freezing waters in the early hours while it is still dark to make sure he catches the sunrise.

He is constantly battered against rocks and has been seriously injured before, but it is all worth it when he sees the faces of people who cannot believe his photos were taken just minutes from their homes.

‘I’m addicted to trying to get the perfect shot and that’s what keeps me out in the waves,’ he said. 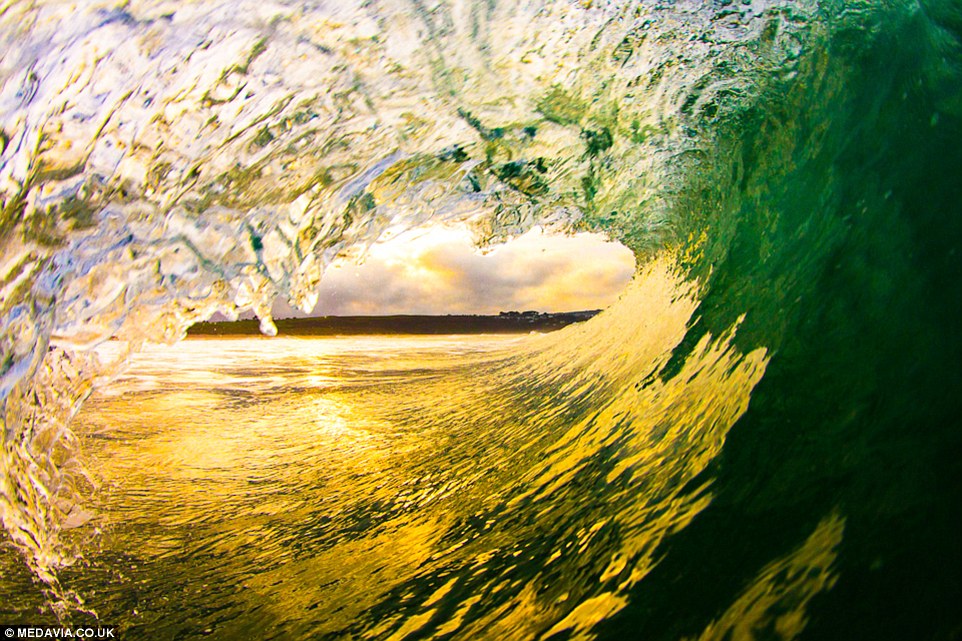 Mr Morse has seriously injured himself while taking the photos before – his camera crashed into his head and split it open, but it has not deterred him from continuing, This photo was taken at Godrevy 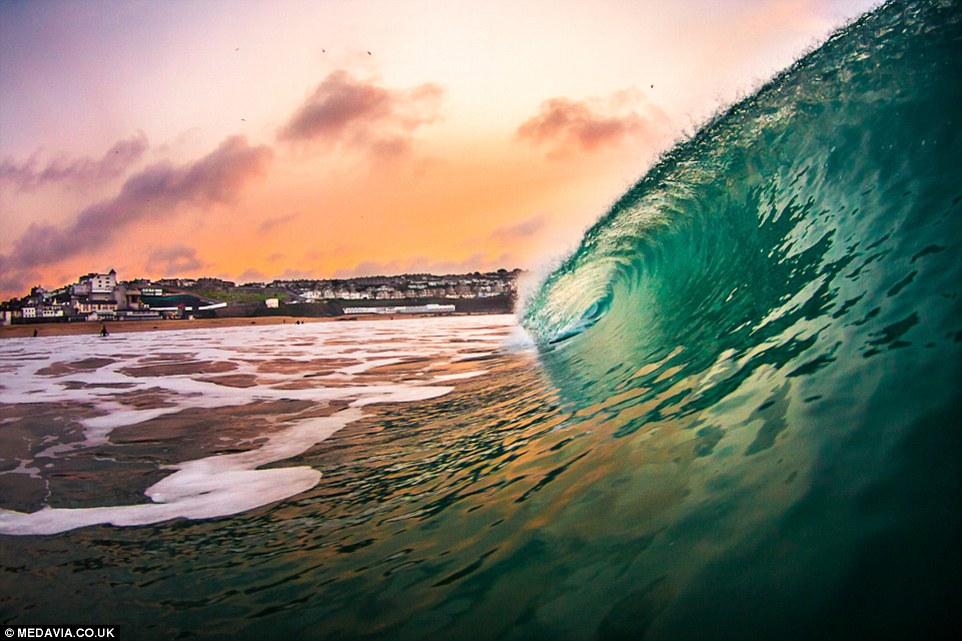 The surf instructor goes all over Cornwall to take the photographs, which he then compiles into calendars and sells. This one is from Porthmeor (St Ives)

‘It is grey most of the time in Cornwall but it can look quite tropical especially when the sun is coming up.

‘A lot of people are surprised to find out that my pictures were taken in the UK – people think these pictures must have been taken in Hawaii or the Canary Islands.

‘Even the local surfers who know the coast here better than anyone think they could not have been taken in Cornwall.’ 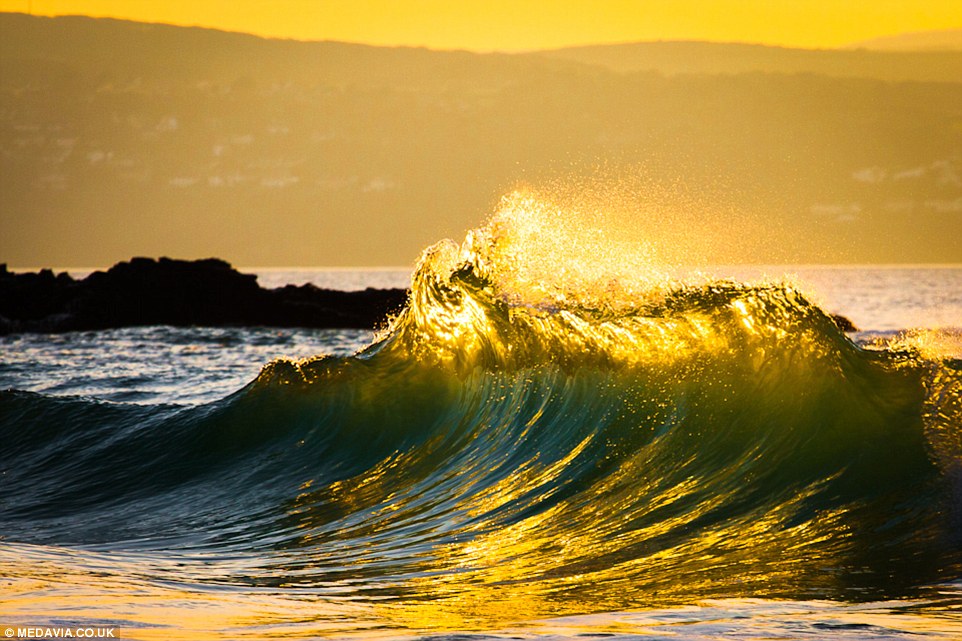 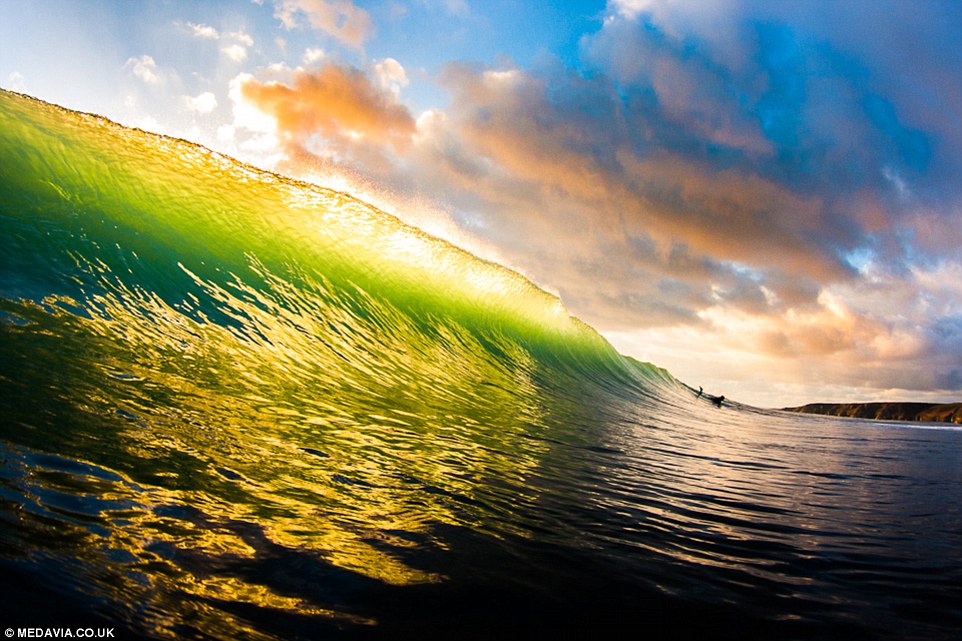 He will spend hours in the water at places like this in Porthleven – as long as five at a time, and says that he can only ever be found in the sea or in the pub

Mr Morse has a girlfriend of two years, 21-year-old Holly Lanyon, also from St Ives, and luckily, she doesn’t mind that her boyfriend spends so much time in the sea.

‘She is pretty cool about me being in the water all the time,’ he said. ‘She doesn’t come out with me when I take my pictures, I prefer being by myself to take them.

‘Since we have been together I have taught her how to surf, so we both do spend some time together in the sea.’

Mr Morse takes pictures all over Cornwall and sells calendars featuring his pictures. Some of his snaps hang in local restaurants and hotels. 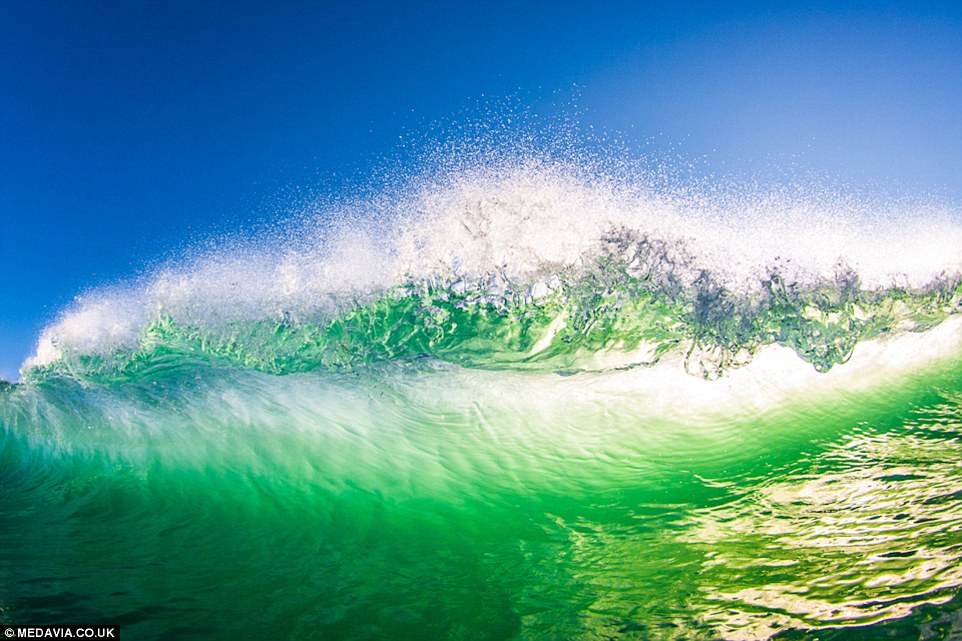 Mr Morse has been taking the unique photographs for five years, starting out when he was just a teenager. This one comes from Porthleven 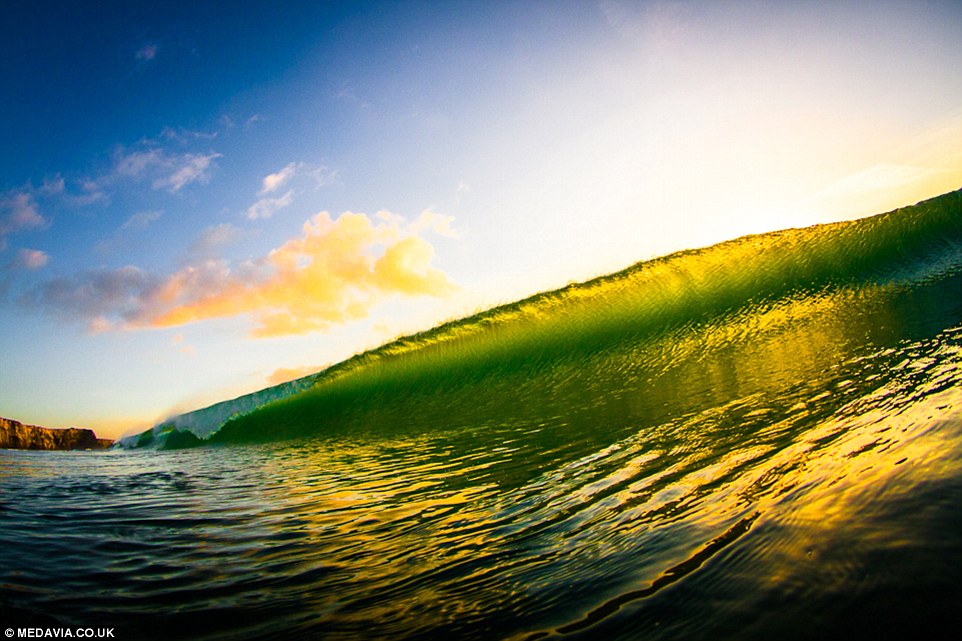 Mr Morse is often smashed into rocks and back onto the sand by large powerful waves, but says the knocks and scrapes are worth the end result. This huge wave was captured at Watergate Bay in Newquay

He often spends as long as five hours in the water with his Canon EOS 7D SLR, waiting to capture the perfect picture from inside a wave.

‘This means I’ll get in the water when its dark and get straight in the sea to wait for the sun to come up.

‘I can be in the water for hours – basically until I fill up my memory card.’ 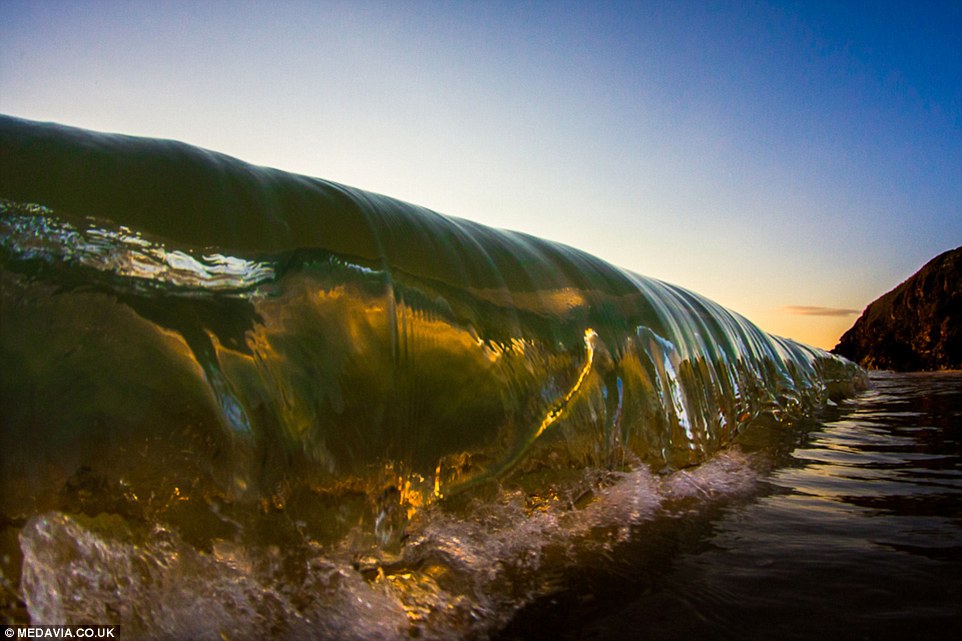 The impressive photographer often does not leave the water until he has filled up his entire memory card with images like this, from Watergate Bay 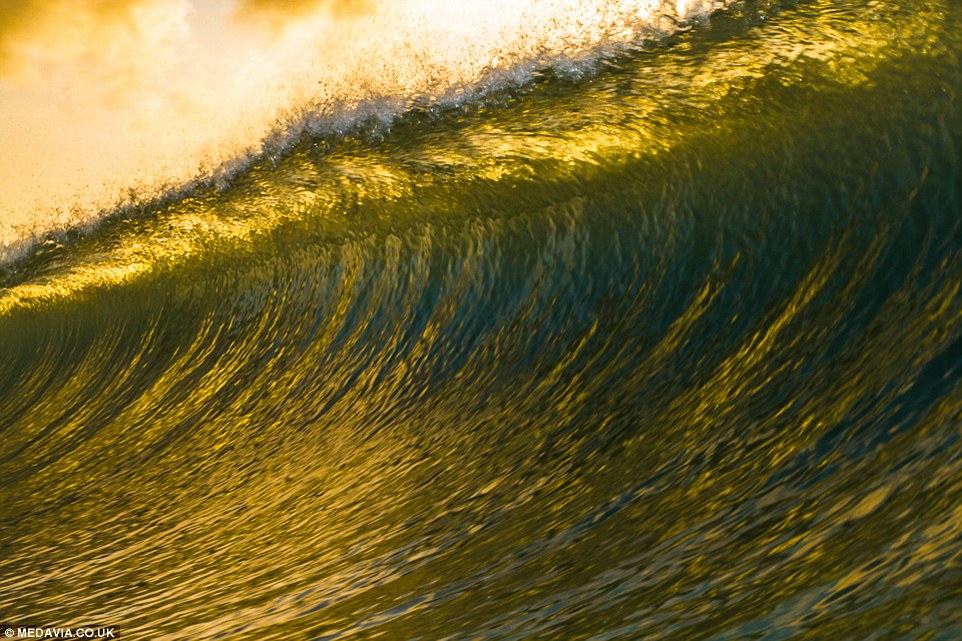 Cornwall is one of the best areas of the UK for surfing, along with neighbouring county Devon, as well as parts of Wales and Scotland. This was was snapped at Godrevy

The bold wave-rider said he has severely hurt himself before, while trying to photograph the crashing waves, but says that comes as part and parcel of what he does.

‘To take the pictures you need to stand right in the impact zone, the area where the wave curls over,’ he said.

‘If you want to get the shot you have to put yourself in a position where you will get crumpled up on the beach or smashed up into the sand.

‘I split my head open with the waterproof housing on my camera once. The wave hit the camera and the camera hit me in the face and I caught the sharp edge of the housing.

‘Sometimes I shoot on a shallow reef, so when the wave hits I get smashed into the rocks.

‘It doesn’t deter me at all because I love getting the pictures, and who cares about a few scratches and bumps?’ 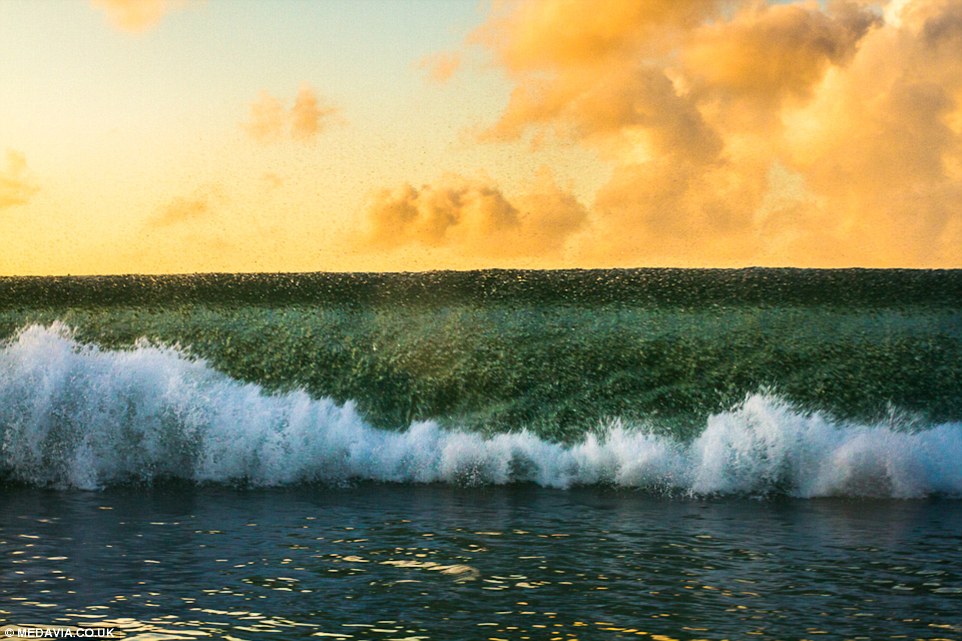 A green-blue wave rolls towards the camera at sunset at Godrevy, the colour of the water contrasting with the reds and oranges in the sky