GAZA CITY – Grinning Israeli tank commanders have been pictured flashing the victory signs as they blast their way through Gaza in the bloodiest day of the offensive so far.

After weeks of escalating conflict in Gaza, both sides reported death tolls that made clear Sunday was the deadliest day so far in the war. The Palestinian Health Ministry reported that 87 Palestinians had died, and the Israeli military said 13 soldiers were dead.

Since this morning’s dawn strike on Gaza City’s Shijaiyah neighbourhood – including the son, daughter-in-law and two small grandchildren of a senior Hamas leader.

The neighbourhood has come under heavy tank fire as Israel widened its ground offensive against Hamas, causing hundreds of residents to flee.

The dead and wounded – including dozens of women and children – have reportedly been left in streets, with ambulances unable to approach.

Early this morning, the wounded from Shijaiyah were rushed to Gaza City’s central Shifa Hospital. Frantic parents carried children wounded by shrapnel and the emergency room quickly overflowed, forcing doctors to treat some patients on mattresses in a hallway. 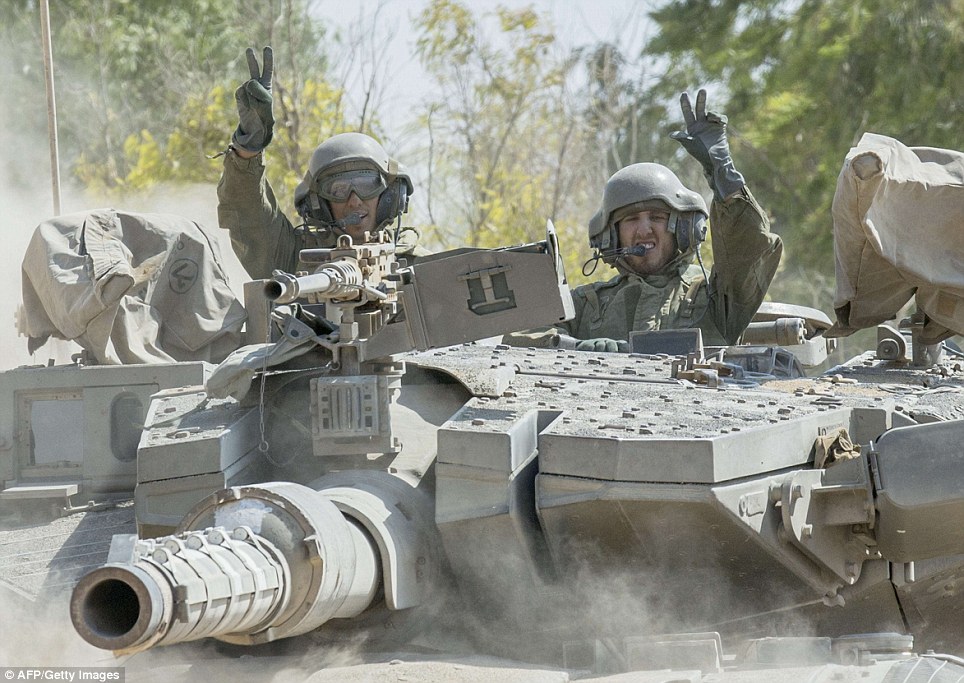 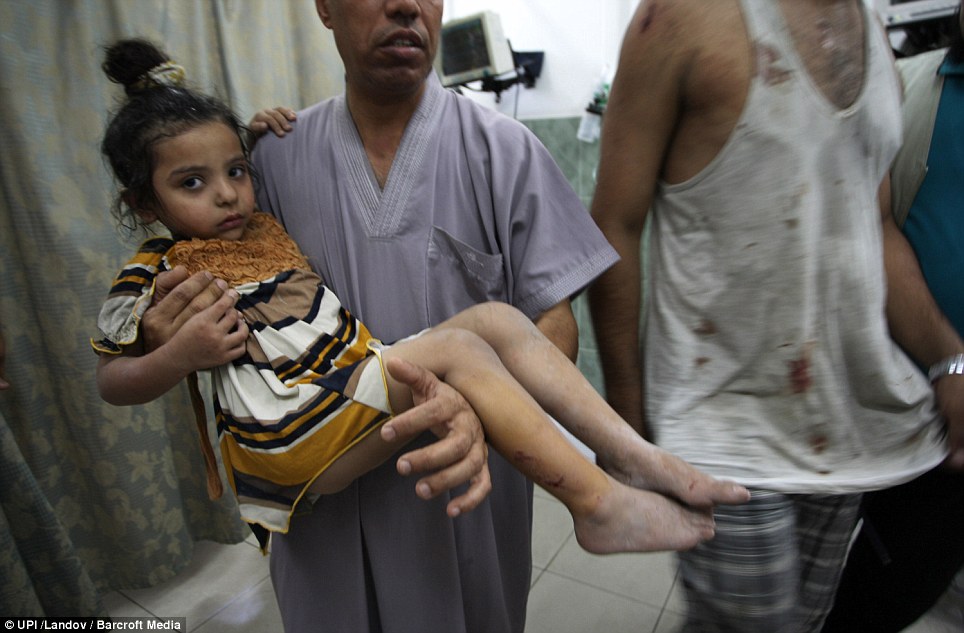 An injured Palestinian child is brought to al-Najar hospital following the Israeli air strike in Rafah, Gaza Strip. The casualties have mounted during the Israeli attacks on Gaza

Frantic parents carried children wounded by shrapnel and the emergency room quickly overflowed, forcing doctors to treat some patients on mattresses in a hallway 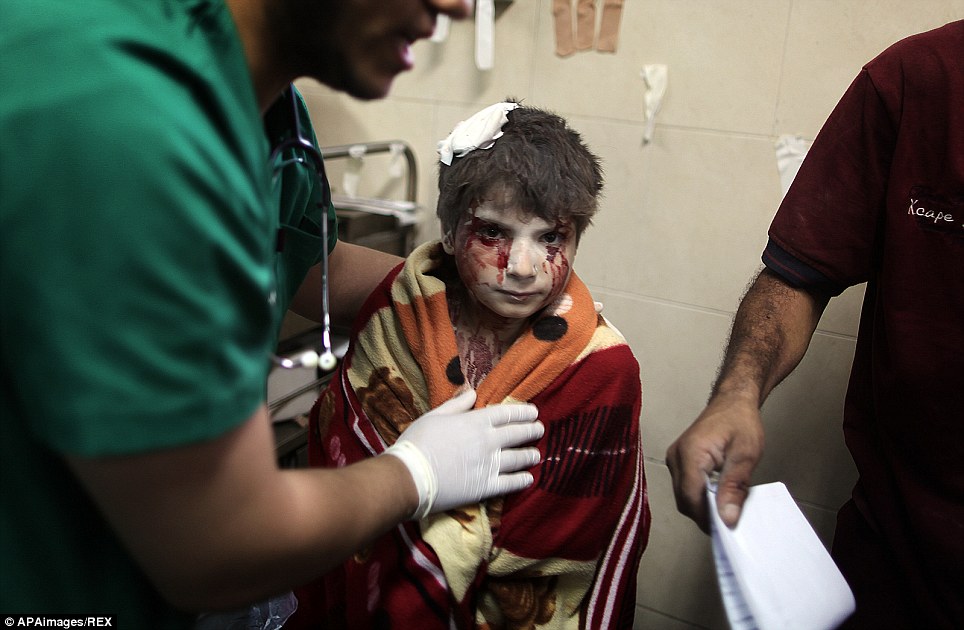 A Palestinian boy, who medics said was wounded by Israeli shelling, receives treatment at al-Shifa hospital in Gaza City 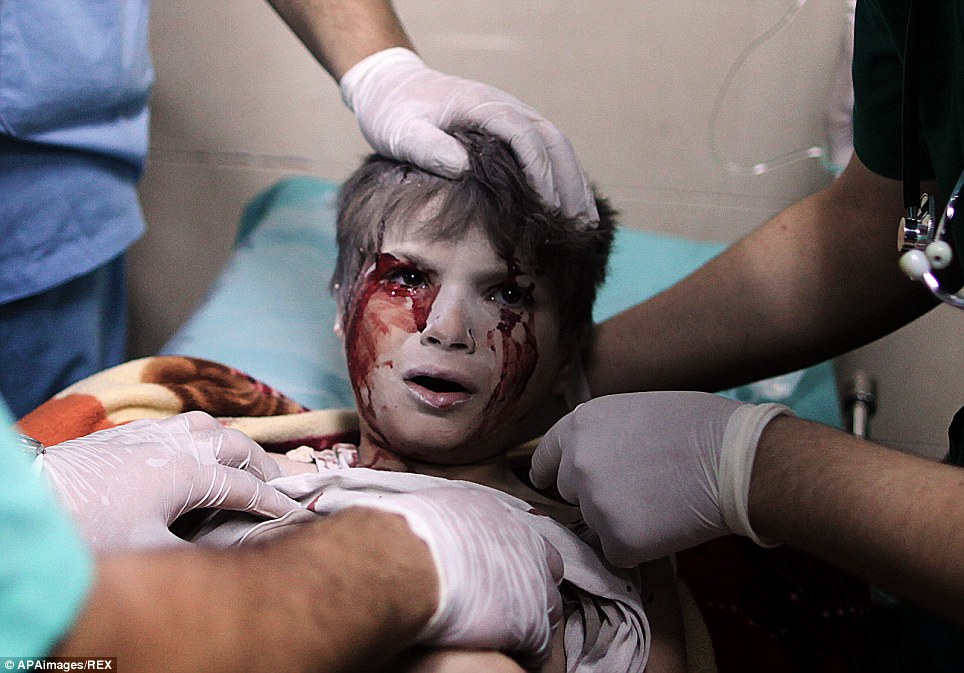 At least 20 Palestinians have been killed by Israeli shelling in a Gaza neighbourhood, where bodies were strewn in the street and thousands fled toward the hospital packed with wounded civilians 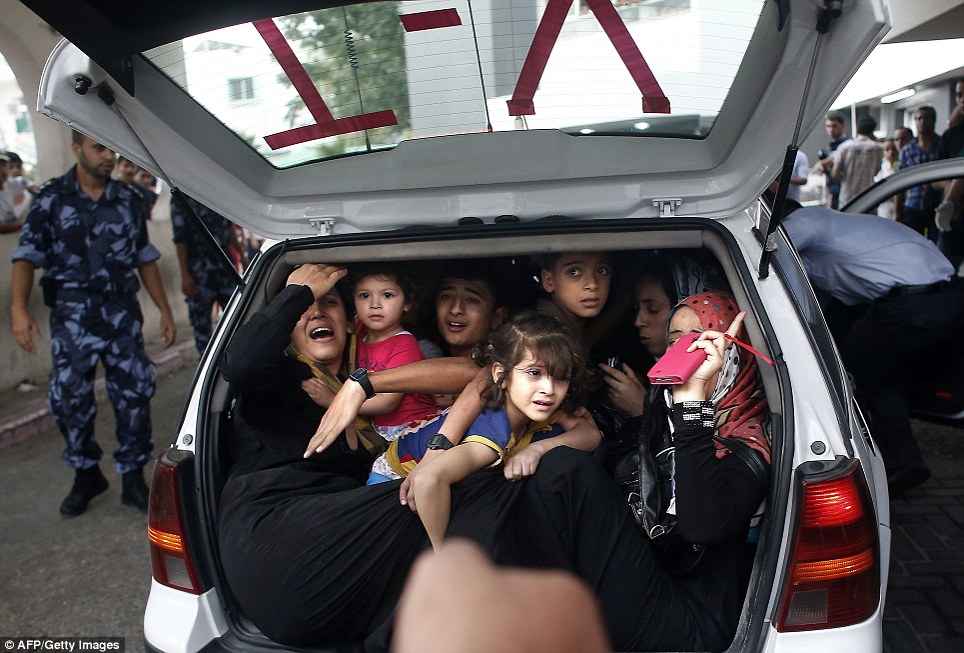 An injured Palestinian family cram into a car as they arrive at al-Shifa hospital in Gaza City. Early this morning, the wounded from Shijaiyah were rushed to Gaza City’s central Shifa Hospital 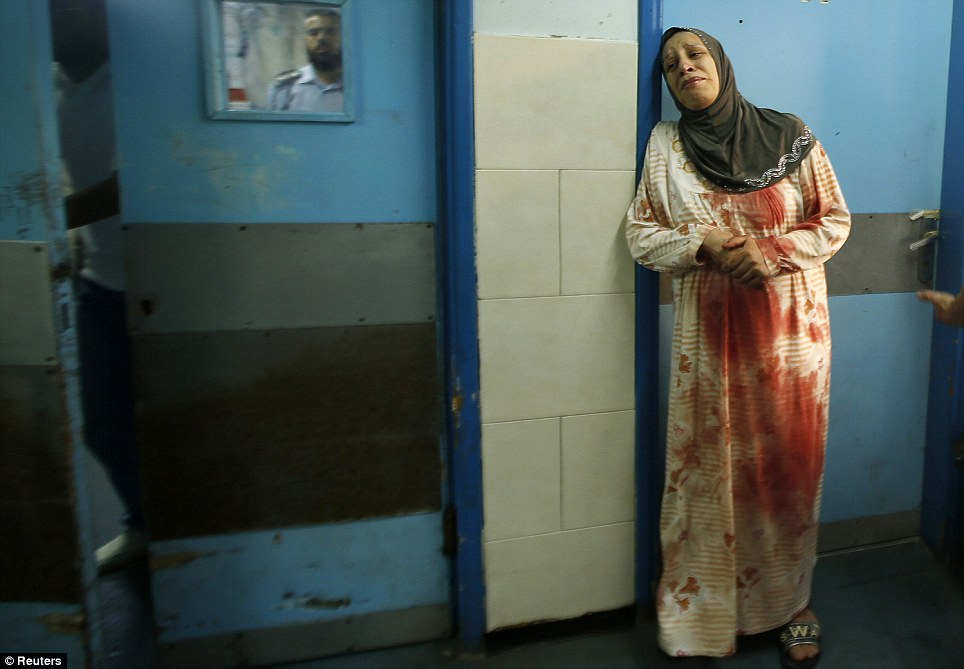 A Palestinian woman wearing clothes stained with the blood of other relatives, who medics said were wounded in Israeli shelling, cries at a hospital in Gaza City 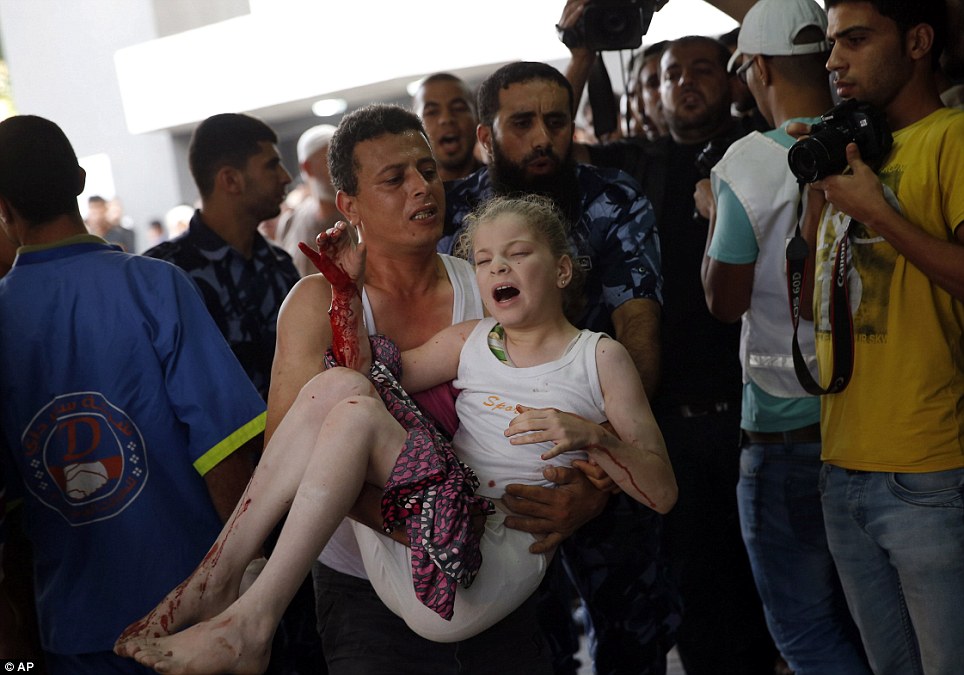 A Palestinian carries a wounded girl in the emergency room of Shifa hospital in Gaza City, northern Gaza Strip 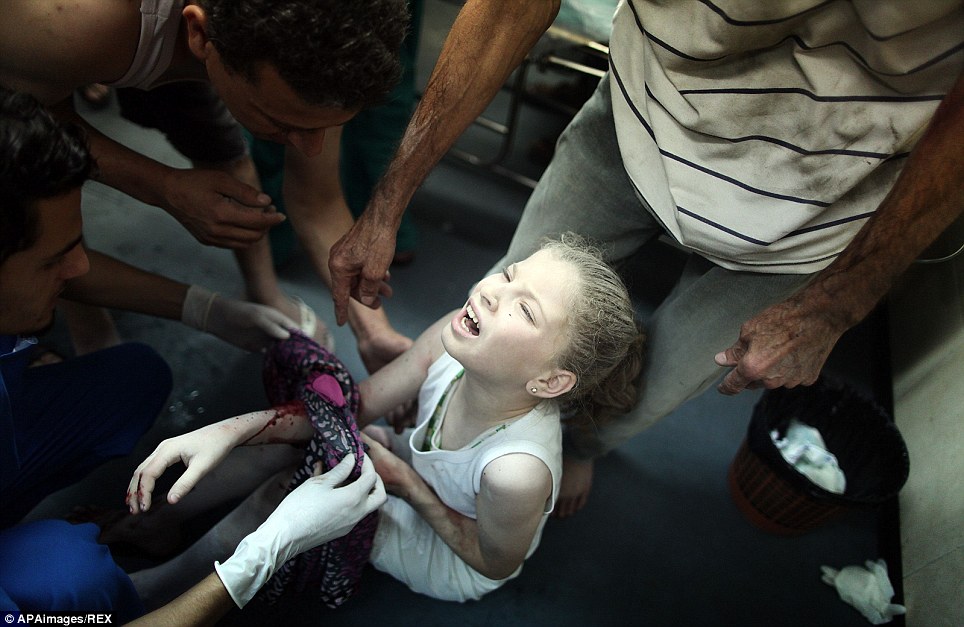 Israel says it is going to great lengths to avoid civilian casualties and blames them on Hamas, accusing it of firing from within residential neighborhoods and using civilians as ‘human shields’ 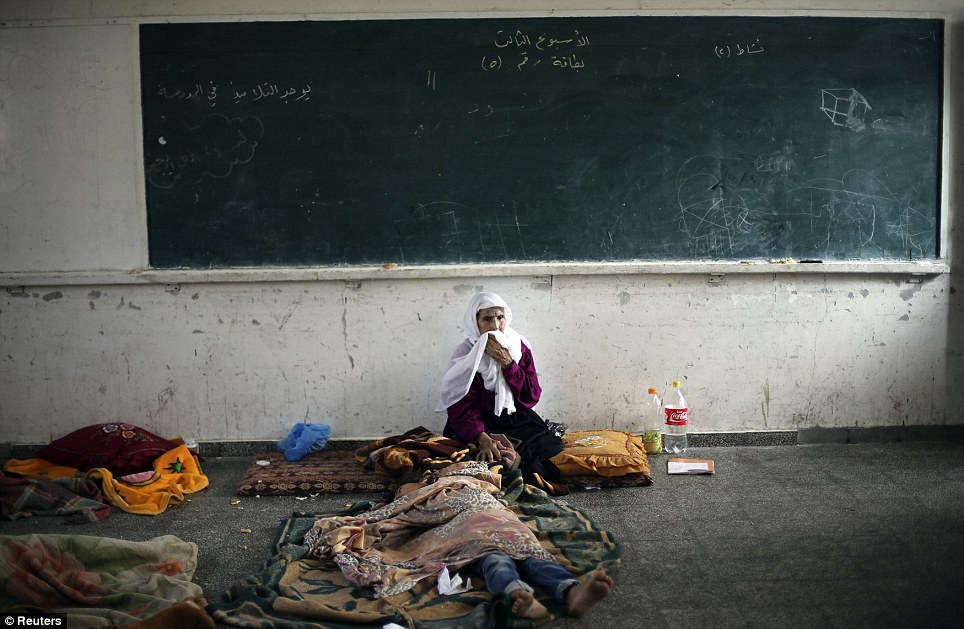 A Palestinian woman, who fled her house following an Israeli ground offensive, stays at a United Nations-run school in Rafah in the southern Gaza Strip. At least 20 Palestinians were killed on Sunday by Israeli shelling in a Gaza neighbourhood, witnesses and health officials said 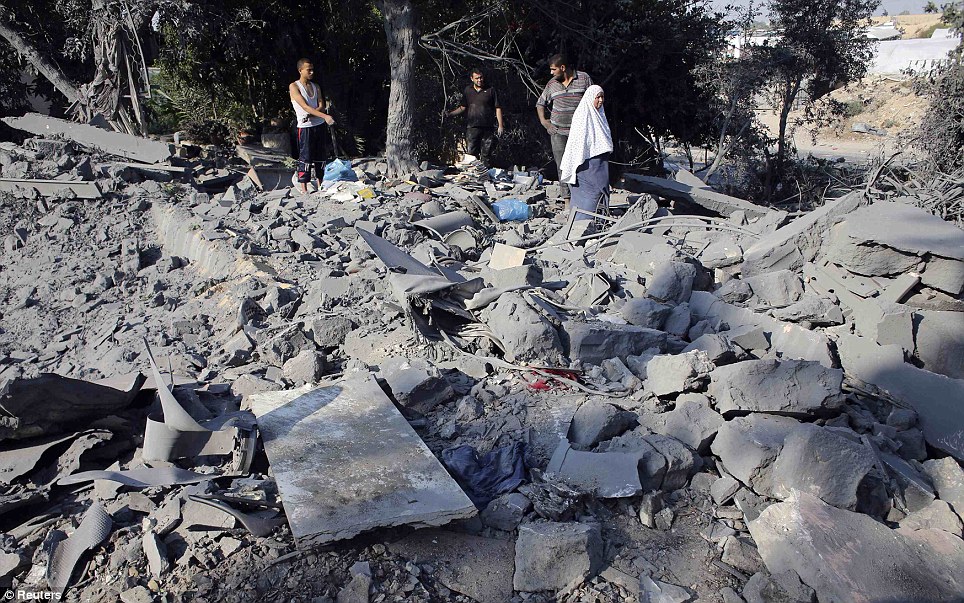 Palestinians look at the rubble of a house which police said was destroyed in an Israeli air strike in Rafah, in what appeared to be the heaviest since Israel launched its offensive on the Palestinian territory on July 8

Throughout the night, loud explosions shook Gaza as Israeli flares lit up the night sky and fighter jets flew low over the densely populated territory.

Today’s battle was the deadliest so far in Israel’s three-day-old ground offensive, which followed 10 days of heavy airstrikes on targets linked to Gaza’s Hamas rulers.

The military said also it had received intelligence reports that Palestinians had strapped explosives to animals and intended to send them toward soldiers. A donkey laden with explosives approached soldiers later on and blew up causing no injuries, it said.

The mass casualties in the district in northeast Gaza appeared to be the heaviest since Israel launched its offensive on the Palestinian territory on July 8 after cross-border rocket strikes by militants intensified.

The Hamas military wing said its fighters exchanged fire with Israeli forces in Shijaiyah and a nearby neighborhood. The sound of gunfire could be heard from the centre of the city.

Hamas last week rejected an Egyptian call on both sides to halt hostilities, saying it first wants guarantees that Israel and Egypt will significantly ease their border blockade of Gaza.

Hamas has sought involvement of other countries, such as Qatar, in any cease-fire negotiations, saying Egypt cannot be the sole mediator. The Islamic militant group is deeply distrustful of Egypt’s rulers, who last year deposed a Hamas-friendly government in Cairo.

Since the start of Israel-Hamas fighting almost two weeks ago, 353 Palestinians have been killed and 2,700 wounded, according to Gaza Health Ministry official Ashraf al-Kidra. One-fourth of the deaths have been reported since the start of the ground offensive late Thursday. 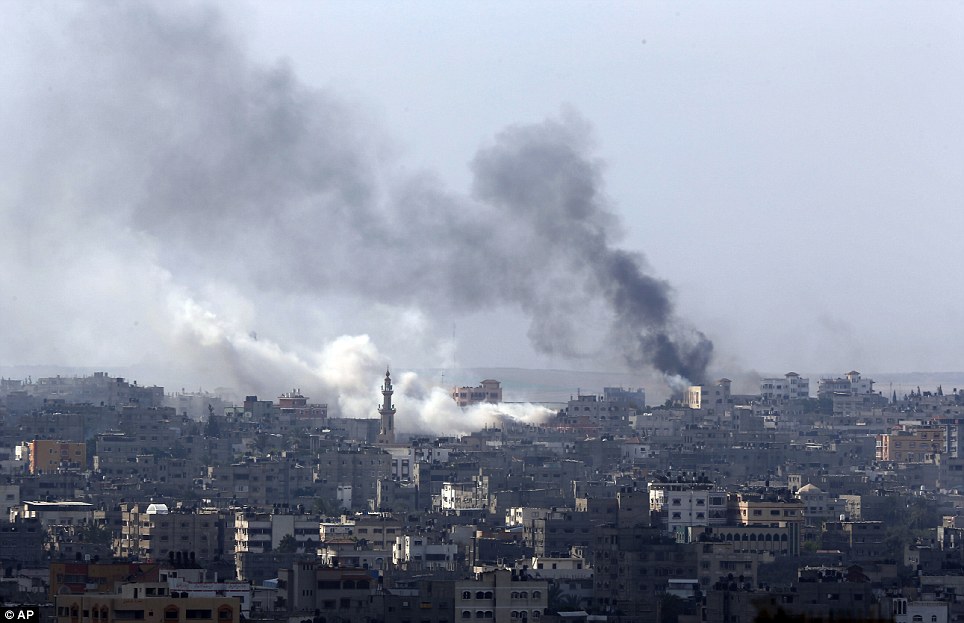 Smoke billows from an area hit by Israeli strikes in Gaza City. Hundreds of panicked residents have fled the neighborhood which they say has come under heavy tank fire from Israeli forces. Some reported seeing dead and wounded in the streets, with ambulances unable to reach the area 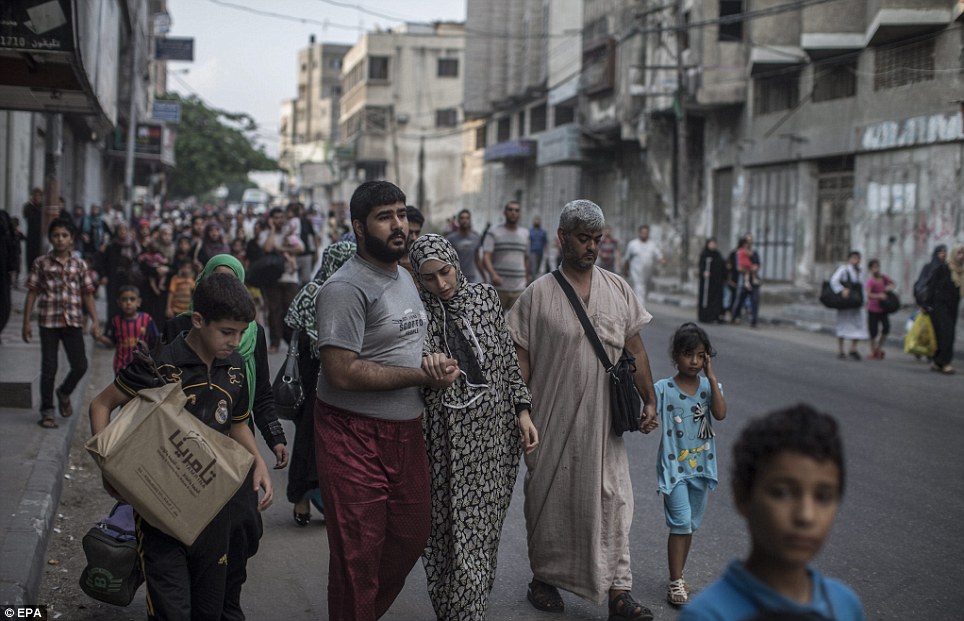 Palestinians who flew from the Shuja’iyya neighbourhood walk on a street in east Gaza City. Tens of thousand of Palestinians living in the area which is in close proximity left their houses in the past days to seek shelter from an Israeli ground invasion 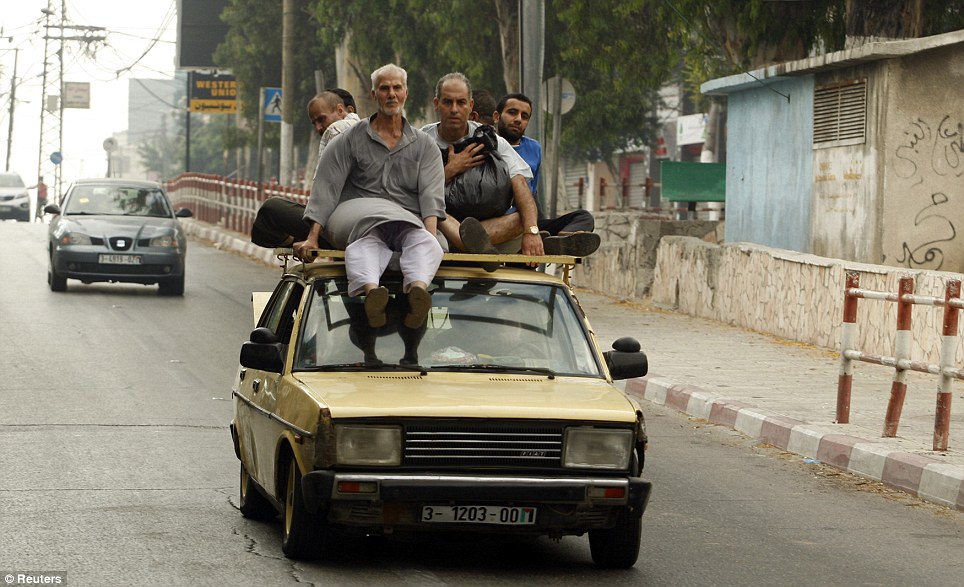 Health Ministry spokesman Ashraf al-Kidra said overnight airstrikes killed 12 people while the the death toll from the offensive has gone up to more than 340 Palestinians.

An Israeli soldier was killed after the start of the ground operation, probably by friendly fire, and an Israeli civilian was killed earlier this week.

The sound of tank fire and heavy machine guns mixed with the mosques’ morning call to prayer along the Gaza-Israel border.

The Israeli military said three soldiers were wounded in overnight fighting, one seriously. Israeli troops were staying close to the border and have yet to enter. 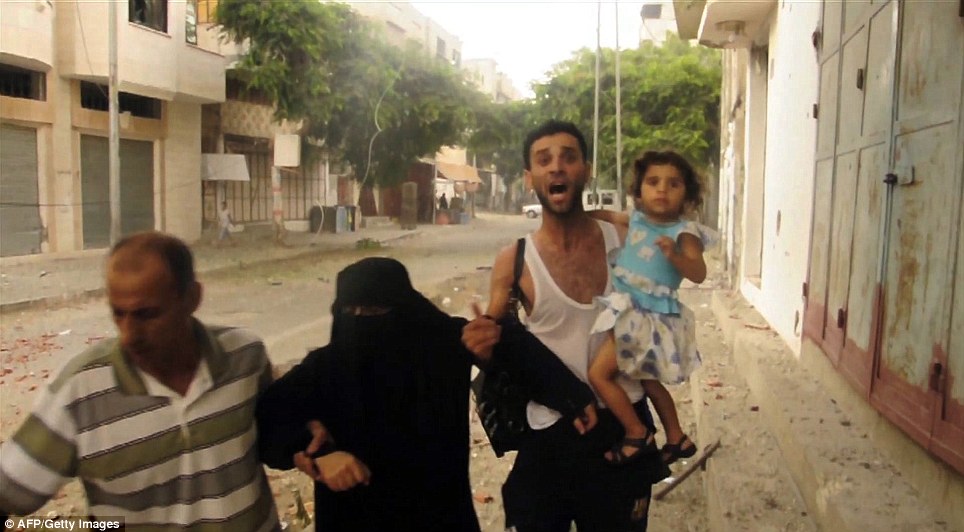 A family fleeing their home in Gaza’s eastern Shejaiya district, after heavy Israeli shelling that left casualties lying in the streets 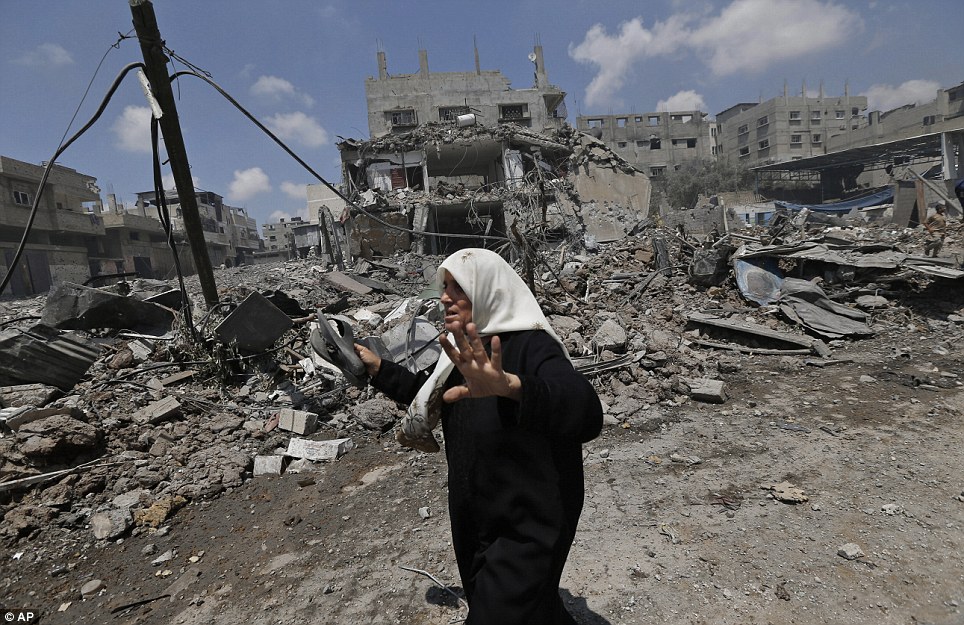 A Palestinian woman runs as she flees Gaza City’s Shijaiyah neighbourhood. Tens of people were killed in Shijaiyah and many more bodies were believed buried under the rubble of homes, health officials said 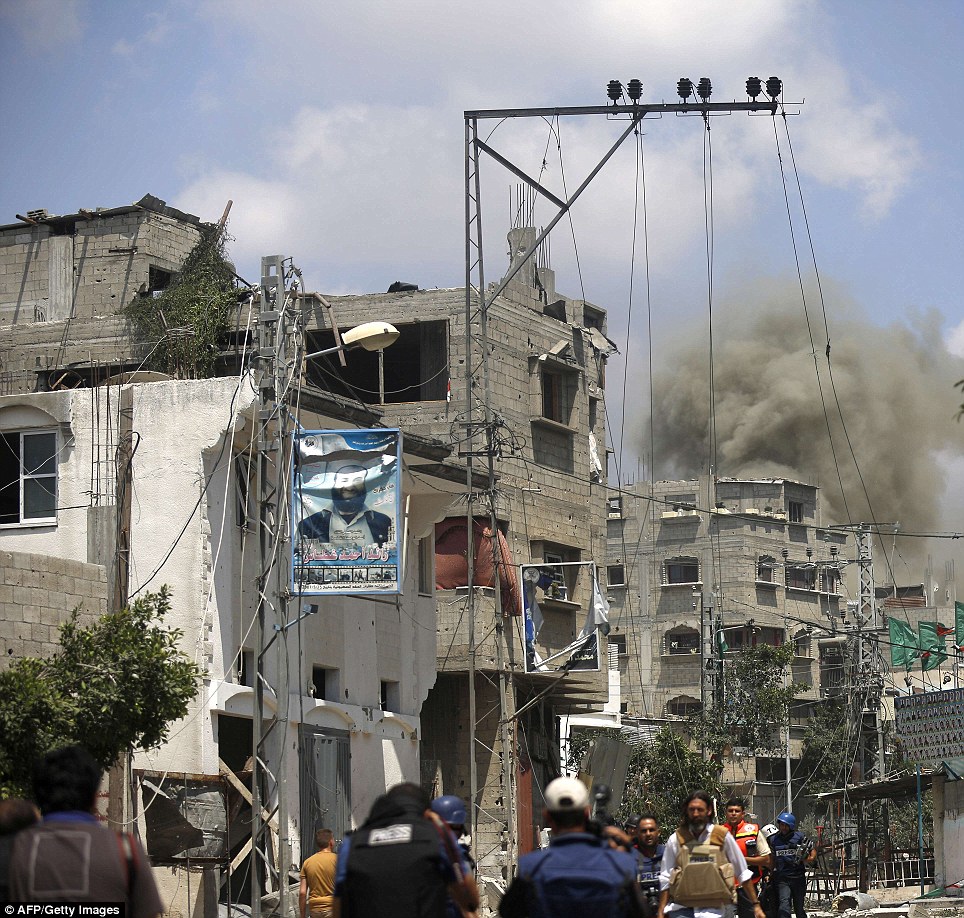 The death toll in Gaza passed 400 as Israel pressed its biggest offensive in the enclave in five years, Palestinian health officials said 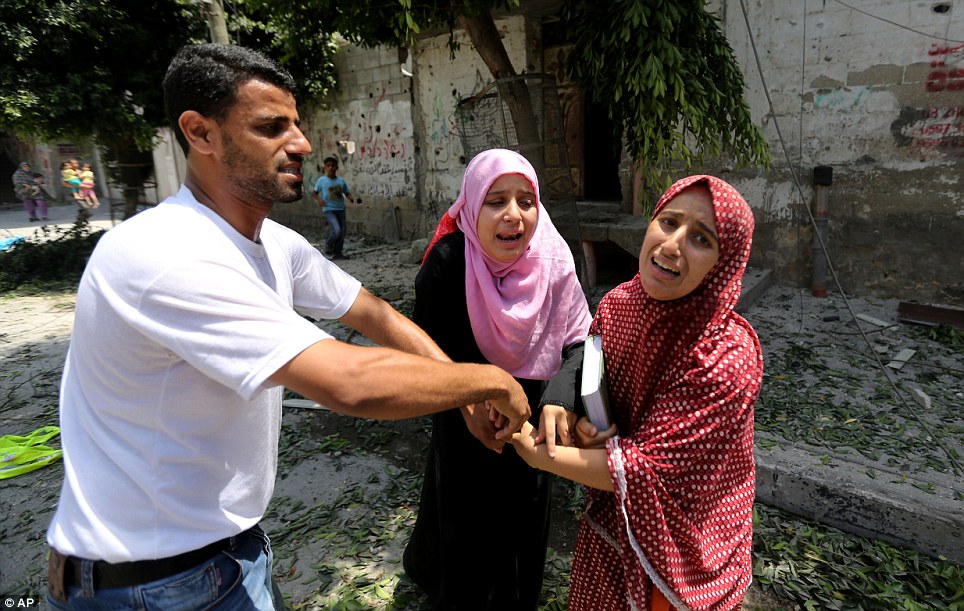 Women cry as they flee their homes. Columns of smoke rose from the neighbourhood as the sound of shelling echoed from inside 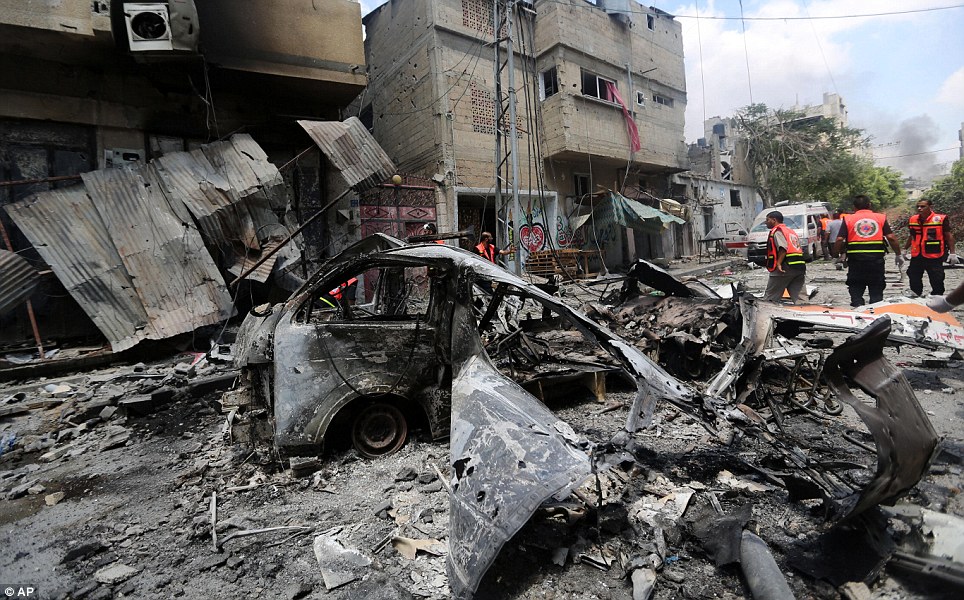 Israeli soldiers uncovered 34 shafts leading into about a dozen underground tunnels, some as deep as 30 meters, that could be used to carry out attacks, the military said.

Still, Palestinian gunmen disguised in Israeli uniforms managed to infiltrate Israel from Gaza using another tunnel and today killed two Israeli soldiers and injured several others, the military said. At least one Palestinian was killed in the clash.

Hamas said 12 of its fighters participated in the attack and that the group took some of the soldiers’ weapons back to their hideouts.

In two other confrontations, Palestinian gunmen jumped out of tunnels and shot at soldiers who returned fire. Two of the gunmen were killed. Another militant died when the explosive vest he was wearing went off, the military said.

In one instance, the militants were found with tranquilizers and handcuffs, indicating they ‘intended to abduct Israelis,’ according to the military.

Prime Minister David Cameron and US president Barack Obama have discussed the worsening situation in Gaza during a phone conversation, Downing Street said.

A No 10 spokeswoman said: ‘Both leaders reiterated their support for Israel’s right to take proportionate action to defend itself from the barrage of rocket attacks from Gaza.’ 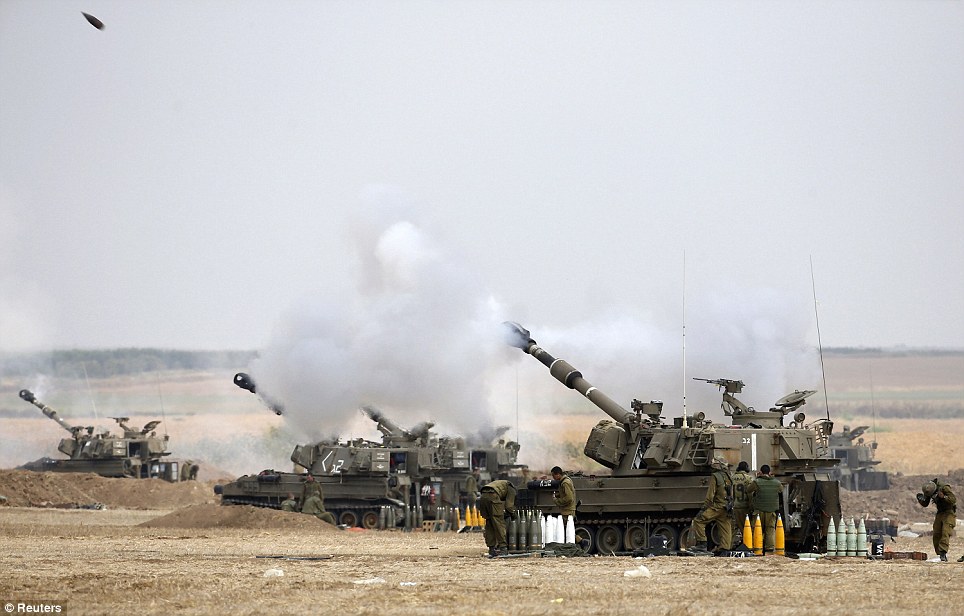 An Israeli mobile artillery unit fires towards Gaza. Militants have kept up their rocket fire on Israel, with no sign of a diplomatic breakthrough toward a ceasefire in sight 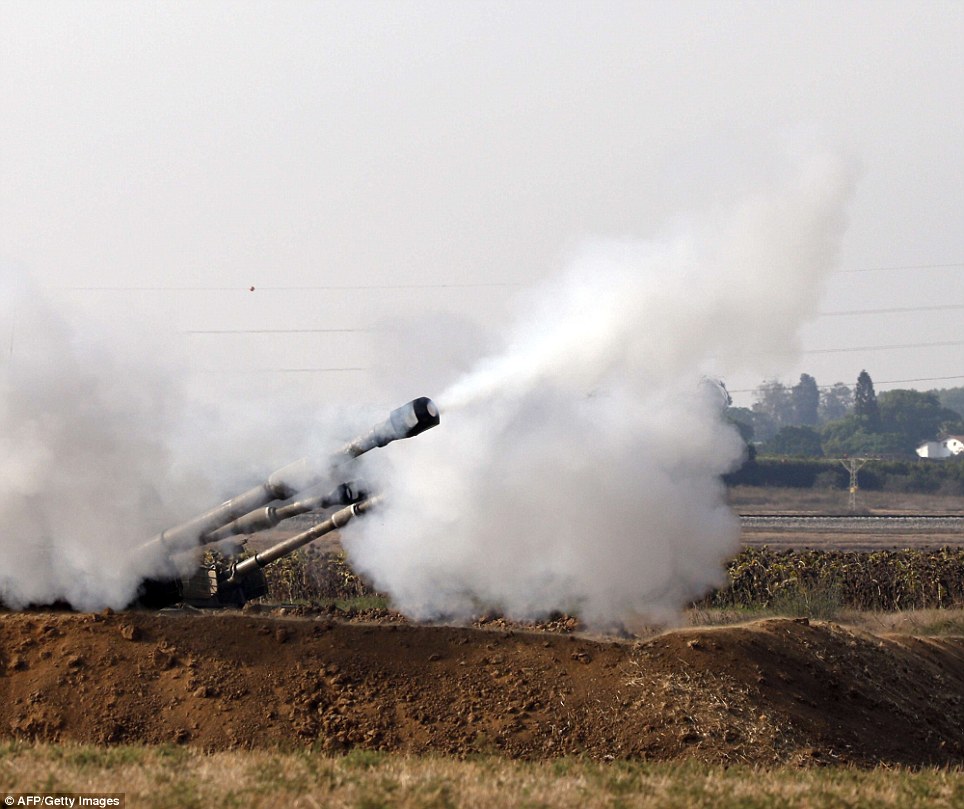 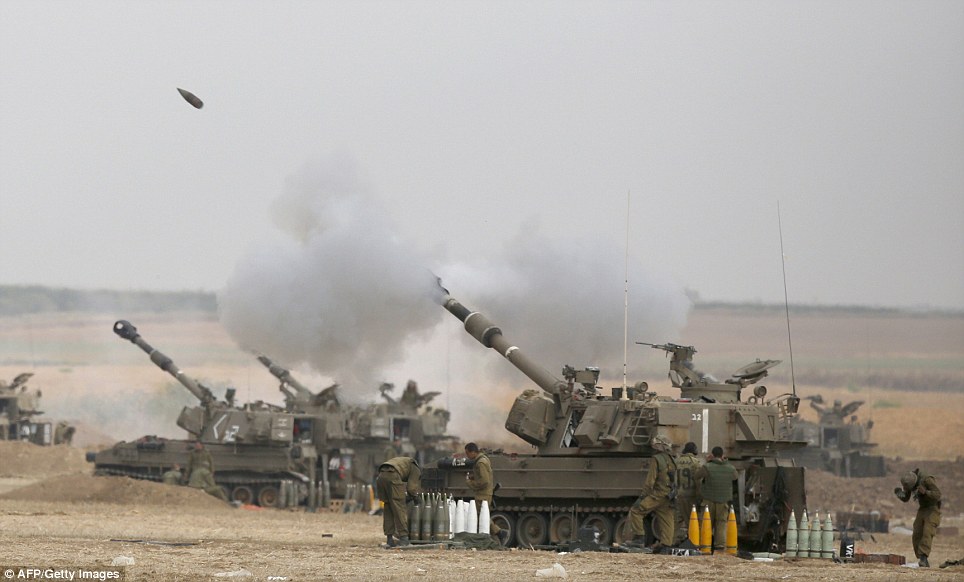 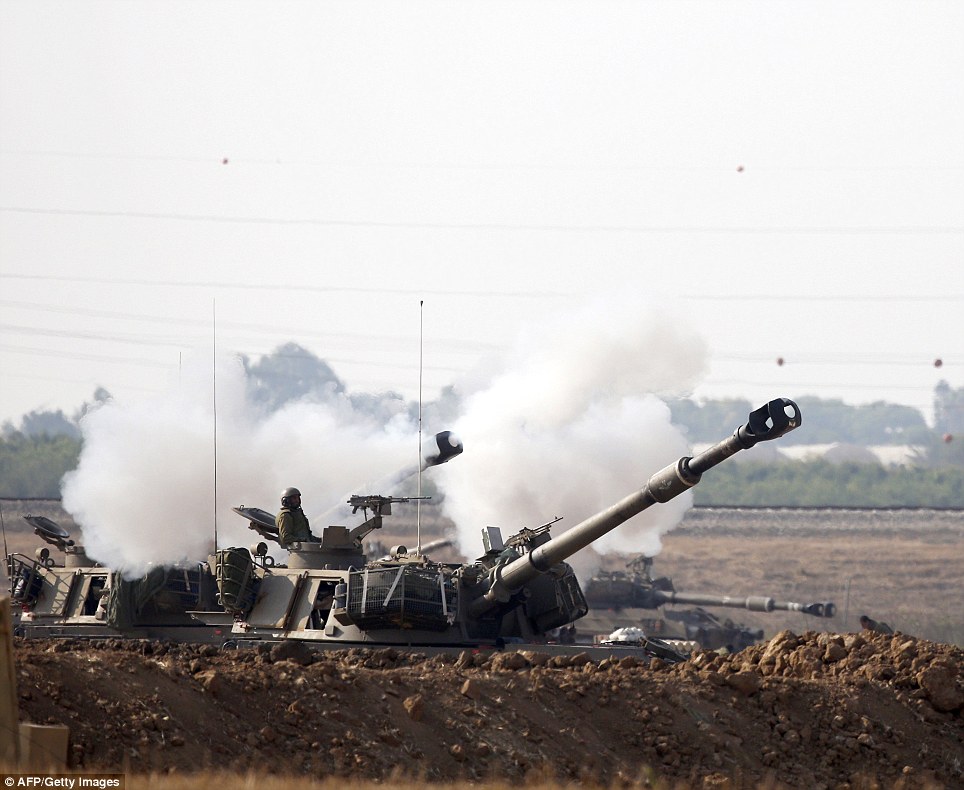 Israel says it has encountered little resistance on the ground so far, and has killed about 20 militants in sporadic gun battles. Three soldiers were wounded in overnight fighting, one seriously, the military said