London – The Israeli military is using flechette shells, which spray out thousands of tiny and potentially lethal metal darts, in its military operation in Gaza. the Guardian reported.

Six flechette shells were fired towards the village of Khuzaa, east of Khan Younis, on 17 July, according to the Palestinian Centre for Human Rights. Nahla Khalil Najjar, 37, suffered injuries to her chest, it said. PCHR provided a picture of flechettes taken by a fieldworker last week.

The Israel Defence Forces (IDF) did not deny using the shells in the conflict. “As a rule, the IDF only employs weapons that have been determined lawful under international law, and in a manner which fully conforms with the laws of armed conflict,” a spokesperson said in response to a request for specific comment on the deployment of flechettes.

B’Tselem, an Israeli human rights organisation, describes a flechette shell as “an anti-personnel weapon that is generally fired from a tank. The shell explodes in the air and releases thousands of metal darts 37.5mm in length, which disperse in a conical arch 300 metres long and about 90 metres wide”.

The munitions are not prohibited under international humanitarian law, but according to B’Tselem, “other rules of humanitarian law render their use in the Gaza Strip illegal. One of the most fundamental principles is the obligation to distinguish between those who are involved and those who are not involved in the fighting, and to avoid to the extent possible injury to those who are not involved. Deriving from this principle is the prohibition of the use of an imprecise weapon which is likely to result in civilian injuries.” 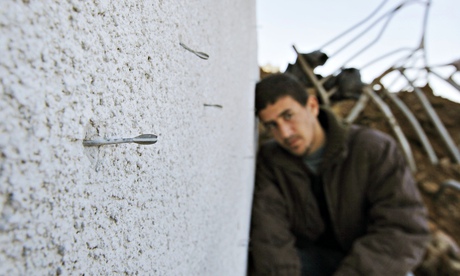 A image taken in 2009 of darts from a flechette shell embedded in a wall in Gaza. Photograph: Ben Curtis/AP

The legality of flechette munitions was upheld by the Israeli supreme court in 2002, and according to an Israeli military source, they are particularly effective against enemy fighters operating in areas covered by vegetation.

The source said a number of armies around the world deploy flechette shells, and that they were intended solely for use against legitimate military targets in accordance with international law.

The IDF has deployed flechette shells in Gaza and Lebanon before. B’Tselem has documented the deaths of nine Palestinians in Gaza from flechettes in 2001 and 2002. Flechettes have also killed and wounded dozens of civilians, including women and children, in conflicts between Israel and Hezbollah in Lebanon.

The Israeli military deployed artillery shells containing white phosphorous in densely populated areas of Gaza during Operation Cast Lead in 2008 and 2009, causing scores of deaths and extensive burns. It initially issued a categorical denial of reports of the use of white phosphorous, but later admitted it, saying the weapon was only used to create smokescreens.

Human Rights Watch said its use of the munitions in Operation Cast Lead was indiscriminate and evidence of war crimes.

In response to a legal challenge, the IDF said last year it would “avoid the use in built-up areas of artillery shells containing white phosphorus, with two narrow exceptions.” The exceptions were not disclosed.